Join Hops for Hunger, Where Every Pint Has Purpose!

You might be planning an elaborate 4th of July picnic, but for thousands of families in need, that kind of celebration is out of the question. That is part of why the nationally recognized WNC beer scene is collaborating to raise awareness for the issue of hunger in Western North Carolina. Over a dozen local breweries are joining forces to help support MANNA FoodBank’s mission to end hunger for thousands of families across WNC through the inaugural Hops for Hunger campaign, July 1st – 9th.

Child hunger increases during the summer, when students who receive free and reduced lunch aren’t receiving these weekday meals, and families face increased pressure to bridge the grocery gap in their budgets. In WNC, 1 in 6 people and 1 in 4 children is affected by food insecurity. These families turn to MANNA and our partner pantries throughout the year, but even more so during the lean summer months, when no school can mean no lunch.

“The local beer scene has always been supportive of our work, by sponsoring our special events, and donating funds and time by volunteering,” says Hannah Randall, Chief Executive Officer for MANNA FoodBank. “This is the first official collective effort from our local breweries to really make an impact, right when families in our area need it most.”

Participating breweries are helping MANNA in one of three ways: donating proceeds from a beer of their choice, donating tips, hosting food donation barrels, and hosting MANNA ambassadors in their tasting rooms to engage their guests about the issue of hunger right here at home.

“WNC breweries can have a real impact with this campaign, especially the breweries donating $1 for a beer,” says Randall. “When you consider that with every dollar raised, MANNA can provide enough food for 3.5 meals to families struggling to make ends meet, you can just imagine the impact that buying just a few beers can really have. It’s a great connection between what makes the Asheville area so fun, and the good that someone can do by simply drinking a great local beer.” 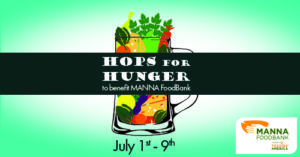 Hi-Wire Brewing: Donating 50 cents of every Hi-Wire beer sold at The Cantina in Historic Biltmore Village (ongoing!); hosting food donation barrels at the Big Top; hosting a pint night to benefit MANNA on August 31, with 15% of all proceeds donated to MANNA

Wicked Weed: Donating $1 from each pour of a beer they brewed just for Hops for Hunger, simply called MANNA; hosting a MANNA ambassador on July 1 at their main location and July 7 at the Funkatorium; hosting food donation barrels

One World Brewing: Donating $1 from each pour of the Ashevegas Pale Ale for the ENTIRE MONTH OF JULY; hosting a MANNA ambassador on July 7 in conjunction with a special event

Bhramari Brewhouse: Donating $1 per pour of Luck Dragon Kolsch as a benefit for MANNA for the ENTIRE MONTH OF JULY; hosting food donation barrels

Catawba Brewing: Donating $1 from each pour of a beer brewed just for MANNA, Stay Awhile Lemon Blonde Ale, at their South Slope and Biltmore Village locations, and at Milepost 408, the new beer and wine bar at Biltmore Farms Hotels’ newest hotel, the Hampton Inn at Biltmore Village

French Broad Brewing: Donating a portion of sales from the ENTIRE WEEK to MANNA!! Also hosting food donation barrels and a MANNA ambassador sometime during the week