MANNA FoodBank kicked off the public phase of the Space to Erase Hunger Capital Campaign on Tuesday, April 14th. MANNA has reached $2.3 million of its goal of $3million in a capital campaign that began in early 2014. 75 percent was raised in the quiet phase, with major donations coming from the Glass Foundation, Wells Fargo, and the Community Foundation of Henderson County, among others. The Glass Foundation has issued a grant challenge to the community which will match contributions made to the campaign up to $250,000. The first gift of the public phase, a donation of $50,000, came from long-time MANNA supporter Ingles Markets.

Three hundred people gathered in MANNA’s two warehouses to mark the beginning of the public phase. Buncombe County resident and Grammy winner David Holt has been named the Honorary Campaign Chair, and he entertained all those in attendance with stories and songs from around Western North Carolina. Food was provided by Harrah’s Cherokee Resort Casino, wine was provided by the Biltmore Winery, and beer was provided by Highland Brewing Company. 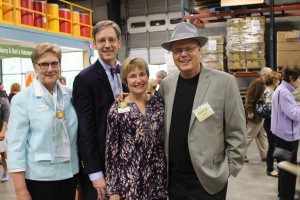 “The quiet phase of the campaign was a huge success, and we’re excited to unveil this important project to the public,” said Brad Searson, Campaign Committee Chair. “The demand for food assistance continues to rise. The renovations funded through this campaign will allow us to distribute more fresh and nutritious food to our Western North Carolina neighbors facing hunger.” Proceeds from the capital campaign will support the renovation of MANNA’s two warehouses. Last year the food bank distributed 15 million pounds of food, enough to provide 34,000 meals a day. MANNA has more than doubled its food distribution within the region in the last eight years, and the need for nutritious food shows no sign of letting up.”One in four children in Western North Carolina does not always know when or how they will get their next meal. That’s going on here in our own communities,” said David Holt. “I joined in this effort because I believe that if we work together, we can make a huge difference in the lives of so many.”

MANNA has had to turn away over a half million pounds of food because it did not have the freezer or cooler space to store it before distribution. Key features of the renovation plan are a freezer that will keep four times more frozen food, and a cooler space that will almost double MANNA’s current capacity.

“As it stands now, our space dictates the type and amount of food we can accept and distribute,” said Cindy Threlkeld, Executive Director of MANNA FoodBank. “107,600 people in our region sought food assistance last year. Many of the families we serve are stretched to the limits, and as a result they must make spending trade-offs, often on a weekly or monthly basis. The food we provide often keeps the lights on, gas in the car, or even helps a senior stay on a medication that is critical to her health. With so many in need, we don’t want to miss a single opportunity to acquire food.”

When the project is complete, MANNA will be able to distribute up to 20 million pounds, as the need and available food dictates. Beyond the increased capacity to store perishable food, there will also be the following improvements:

“Since we opened our doors in 1983, the people of Western North Carolina have shown incredible support for MANNA,” said Threlkeld. “Last year we were supported by over 10,000 individual donors and 7500 volunteers, and we simply could not exist without this community of caring. This campaign is an opportunity for people to make a lasting difference in the work of ending hunger in our region.”