Potato Recipes for Your Pantry 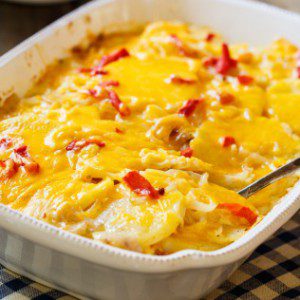 3 tsp. salt, plus more to taste

DIRECTIONS: Heat the oven to 375°F, with racks positioned in the middle and the top third of the oven. In a 3- to 4-quart stockpot, bring 2 quarts water and 2 teaspoons of the salt to a boil. Add the potatoes and cook for 10 minutes. Then drain, and set them aside. Combine the cream, shallots, chile flakes, remaining 1 teaspoon salt, the black pepper, and 2 tablespoons of the liquid from the jar of roasted peppers in a small saucepan. Bring to a simmer and cook until the chile flakes have begun to stain the cream, about 2 minutes. Add half of the cheese and stir until it melts, about 1 minute. Remove the pan from the heat. Layer roughly a third of the potatoes in a 6-cup baking dish, overlapping them slightly so that they fit in an even layer. Scatter half of the roasted peppers on top of the potatoes (cut up any peppers that have remained whole so that they lie flat), and repeat layering potatoes and peppers until all the peppers and potatoes have been used. Pour the cream mixture over the potatoes and peppers, and agitate the dish to distribute the liquid throughout. Cover with aluminum foil and bake on the middle rack for 15 minutes. Uncover the dish, sprinkle the remaining cheese over the top, and place the dish on the top oven rack. Bake for 8 minutes, or until the cheese is bubbly and gently browned on top. Serve immediately. serves 6-8 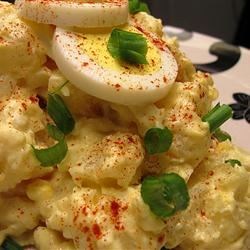 DIRECTIONS: Boil cubed potatoes until they are tender. Drain and cool. In a large bowl add celery, onion, 2 eggs and pickled relish. Add the salad dressing, yellow mustard and sugar. Stir well. Place the sliced egg on top of potatoes and sprinkle with paprika and salt. Let the potato salad chill in the refrigerator for 2 ½ hours or overnight. 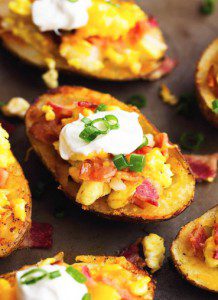 DIRECTIONS: Heat the oven to 400°F and arrange a rack in the middle. Pierce each potato several times with a fork or sharp knife. Place the potatoes directly on the oven rack and bake until the skins are crisp and a knife easily pierces the potatoes, about 50 minutes. Transfer to a wire rack until cool enough to handle, about 10 minutes. Set the oven to broil. Slice each potato in half lengthwise. Using a spoon, scoop out the flesh, leaving about 1/4 inch intact; reserve the flesh for another use. Brush the insides of the potatoes with the melted butter and season with salt and pepper. Flip the potatoes over, brush the skin sides with butter, and season with salt and pepper. Evenly space the potato halves skin-side up on a baking sheet and broil until the butter foams and the skins start to crisp, about 2 to 3 minutes (keep a close watch so they don’t burn). Flip the potato halves over and broil until the top edges just start to brown, about 2 to 3 minutes more. Evenly fill each skin with cheese and crumbled bacon. Place in the broiler and broil until the cheese is melted and bubbling, about 4 to 5 minutes. Remove from the broiler and top each with 1 teaspoon of the sour cream and a sprinkling of the chives. Serve immediately. 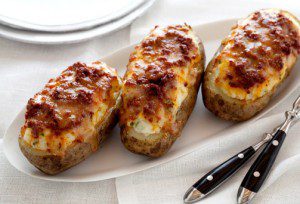 1 cup Cheddar or Jack cheese (or a mix of both), plus more for topping

DIRECTIONS: Preheat the oven to 400 degrees F. Place the potatoes on a baking sheet. Rub them with the canola oil and bake for 1 hour, making sure they’re sufficiently cooked through. Slice the butter into pats. Place in a large mixing bowl and add the bacon bits and sour cream. Remove the potatoes from the oven. Lower the heat to 350 degrees F. With a sharp knife, cut each potato in half lengthwise. Scrape out the insides into the mixing bowl, being careful not to tear the shell. Leave a small rim of potato intact for support. Lay the hollowed out potato shells on a baking sheet. Smash the potatoes into the butter, bacon and sour cream. Add the cheese, milk, seasoned salt, green onions and black pepper to taste and mix together well. (IMPORTANT: If you plan to freeze the twice-baked potatoes, do NOT add the green onions.) Fill the potato shells with the filling. I like to fill the shells so they look abundant and heaping. Top each potato with a little more grated cheese and pop them in the oven until the potato is warmed through, 15 to 20 minutes. 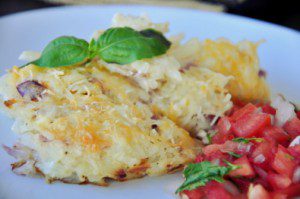 DIRECTIONS: Preheat oven to 350°F and spray an 11 x 14 baking dish with cooking spray. Mix the above ingredients together, place in prepared pan and bake for 45 minutes or until brown on top. Yields 10-12 servings. 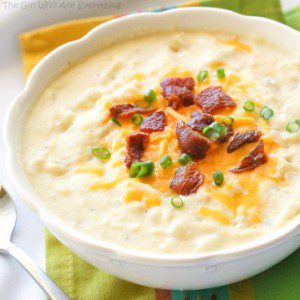 DIRECTIONS: Start by boiling potatoes until fork tender. When potatoes are done, strain out the water and add butter. When butter is melted, add flour. Stir gently to make a paste between butter and flour. The paste will coat the potatoes. Add Milk. Consistently stir. Allow the pot to boil. When it reaches boil, turn down to simmer. Simmer on low till soup thickens. Salt and Pepper to taste. Yields 6 servings.